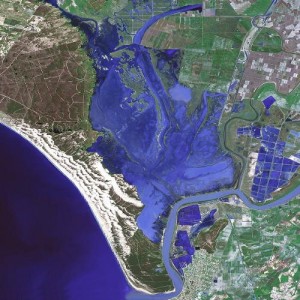 The Guadalquivir River and the Atlantic Ocean shaped the old bay located at the mouth of the river and created the region known today as Doñana. The sediments carried by the river and the sands pushed inland by the sea currents and winds filled the shallow waters of the bay to build a territory made of sands and clays. There are 3 main ecosystems in Doñana: marshland on clay soil, dunes and “cotos” on unstable or stabilised sands.

A sandy bar brought by the sea currents partially blocked the shallow bay where the Guadalquivir River flowed. This contributed to the filling of the bay with fluvial sediments and the formation of the salt marshes. It is believed that the changes made during the eighteenth century by human in the vegetation cover of the once stabilized sands was actually the reason why the sand mobilises and created the current system of Doñana mobile dunes, one of the largest and best preserved in Europe.

The dominant southwest wind, locally called “foreño” pushes the sand inland, away from the humidity of the coast. A long beach of fine white sand runs along the 30 kms that separate Matalascañas (in Huelva province) from Sanlúcar de Barrameda (in Cádiz province ), dotted with old watchtowers in unequal state of conservation. Some species of plants such as the marram grass (Ammophila arenaria), adapted to this difficult substratum, serve as a barrier to the sand, which accumulates around them in small mounds called embryonic dunes. 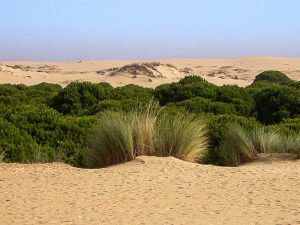 These small dunes grow thanks to the continuous supply of sand from the beach, to build the first line of dunes. This first line is pushed by the winds and becomes higher and higher as it approaches the marshland, where the dry sand journey ends. In rainy years, water drags the sand from the marshes and transports it back to the sea to close a natural cycle.

There are up to 6 of these dune lines or dune fronts. The spaces between them are colonized by vegetation, always ready to occupy any new available area. Small pine woods, locally called “corrales”, come out here. But the umbrella pines (Pinus pinea) are not enough to stop the advance of the dunes. These are simply engulfed by the head of the it, creating to the so-called “campos de cruces”  (fields of crosses) after the dune has come through, when the skeletons of the old buried pines appear behind the tail of the dune. After the passage of the dune a new area is available to be colonized by the vegetation again and a new corral of pines start growing again to awaits patiently during several tens of years the arrival of the sand that put an end to its existence.

Prickly junipers (Juniperus oxycedrus sub.macrocarpa), the remaining of the original vegetation that settled on these sands, are nevertheless able, thanks to their floating roots, to ride on the moving sands, leaving behind them, crowning high mounds of sand, like mute witnesses to the traumatic experience they went through.

The dunes move at an estimated average speed of about 3 to 6 meters a year. The so-called “Cerro de los Ánsares” 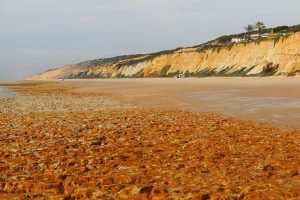 (Geese Hill), the closest to the marshes, is the highest one rising about 35 meters above sea level. It receives that name because in winter they are often visited in the morning by large flocks of geese that, arriving from the marshes, come here to eat some sand to help in the digestion.

A good number of plant species such as the spiny thrift (Armeria pungens) and the curry plant (Helichrysum picardii) are adapted to this arid and though habitat. These sands accumulate daily the signs of the activity of different animals that use them as red deer, wild boar, red fox, spur-thighed tortoise, lataste’s viper, lizards, mice and beetles.

West of Matalascañas, in the Doñana Natural Park, the morphology of the coast changes abruptly, the long sandy beach is here escorted by a cliff of pressed sand, in layers of different colors, of several tens of meters of height and by a line of high fossil dunes, the old coastal dunes, seated on it. This is the Cliff and Dunes of El Asperillo. In some stretches the water and the wind erode the soft wall, producing strange forms and gullies.

On the old stabilised sand dunes that extend northwards from the coast, bordering the salt marshes, different vegetal communities develop adapting to the different environmental conditions and producing differentiated natural landscape. This is locally called “cotos”.

In places of higher elevation where groundwater level usually remains far from the roots occurs what we locally known as “monte blanco” (white scrubland). Here mainly shrub species of medium or low size like different types of rock roses grow. Among them the halimium rockrose (Halimium halimifolium) stands out, their light gray foliage gives meaning to the name given to this plant community.  Several aromatic plants such as rosemary (Rosmarinus officinalis), thyme (Thymus mastichina) and lavender (Lavandula stoechas) also abound.

In the south, next to the Guadalquivir River Mouth, the oldest pine pine plantations dating from the end of the 18th century occur.  On the stabilized sands closer to Matalascañas we find well preserved communities of Phoenician juniper (Juniperus phoenicea), vestiges of the natural vegetation of the area. We also find here several dispersed peridunal lagoons some of which are almost lost by the descendant water table and others still maintain water almost permanently as those named Santa Olalla and Dulce.

In the north of the national park, in the area called Matasgordas, it is still possible to find some well preserved patches of the original cork oak forest, where some wild olive tree also appears (Olea europaea var. sylvestris) and mastic trees (Pistacia lentiscus) and the little dwarf palm (Chamaerops humilis) are common. Here still survive emblematic species of Doñana such as the Spanish Imperial Eagle and the Iberian lynx.

This is the most widespread ecosystem with almost 30,000 has and the one that gives more character to Doñana, which is considered the largest wetland in Western Europe, being breeding and wintering place for hundreds of species of waterfowl. The natural evolution of the marshes and the transformations of the environment carried out by people, which resulted in the loss of 3/4 of the natural marshland, have caused the old tidal floodplain to depend on the rains to flood each year. This is a process that we are now trying to partially reverse through the Doñana 2005 Project, designed after the mine spill of Aznalcóllar in 1998, funded by the European Community.

Doñana’s marshland today is a very changing ecosystem directly dependant on the annual rain cycle. Each summer it dries out completely, offering a rather desolate aspect but not lacking in beauty, with cracked clay soils and little animal life capable of withstanding the harsh conditions of high temperature and dryness. First autumn rains start a new water cycle and then the plains turn green and get ready for the winter floods. Subject to the oscillations typical of our Mediterranean climate, marshes can be adequately filled with water every year or not depending on the amount of water that rain bring us. If the average annual precipitation of around 600 mm is reached or exceeded, marshlands in spring provide the appropriate conditions for a good reproduction of waterfowl. 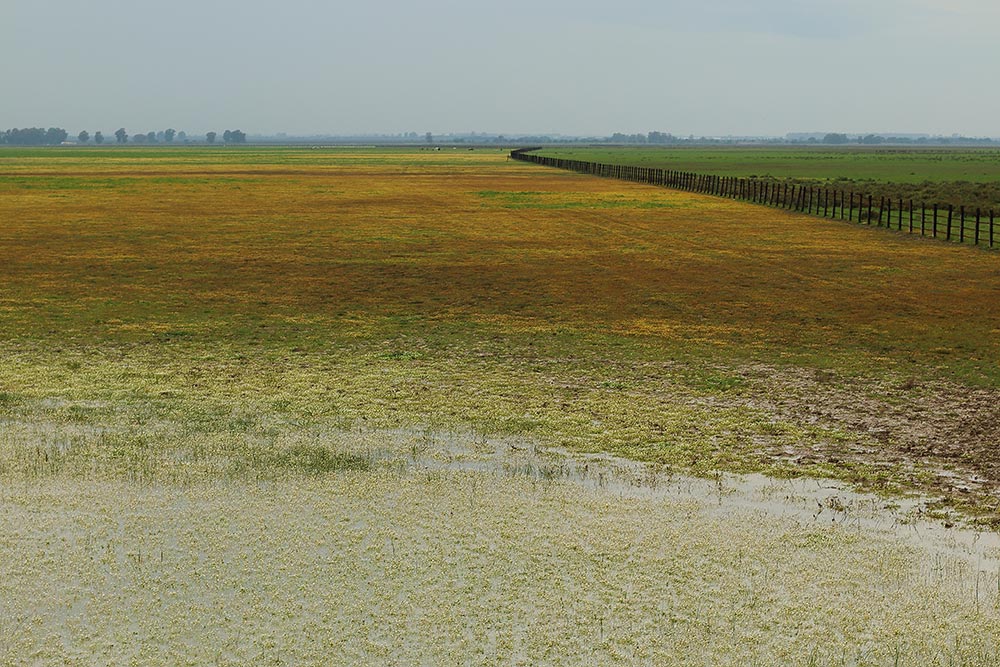 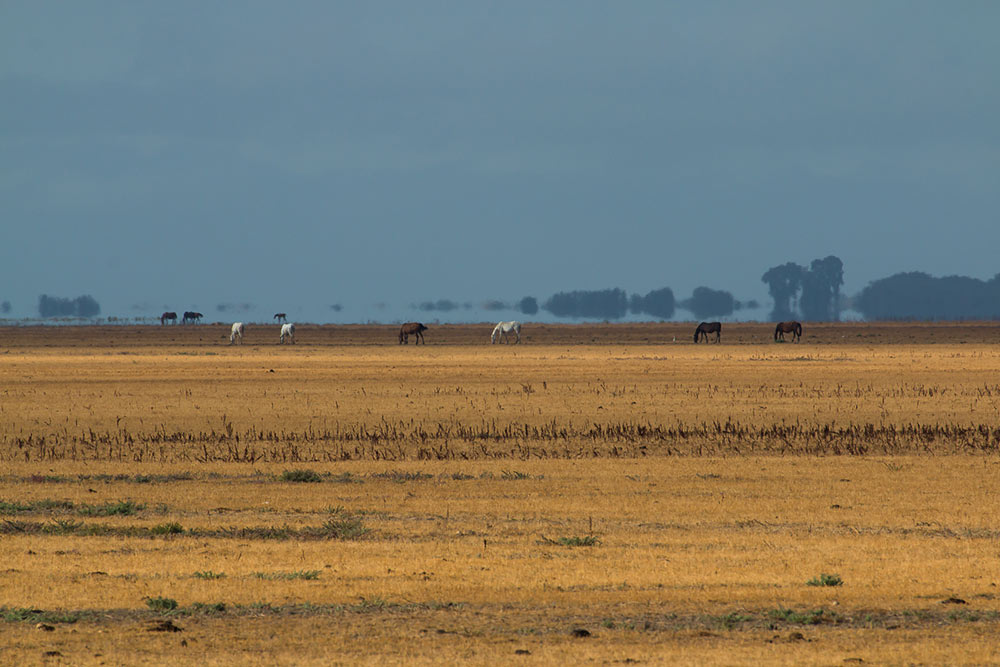 During March, April and May the marshes usually show their best look, with large areas covered with aquatic vegetation that hide the water sheet, and white patches of floating flowers over it. In that dense vegetation herons, ducks, grebes and coots hid and large flocks of flamingos feed.

The variability in the terrain level in the apparently horizontal great plain lead to the diversification of soil characteristics, producing different landscapes with different plant and animal communities. In low areas the freshwater marshes occur, where the large amount of water put the salt content down and allows the growing of large vegetation carpets of bulrush (Scirpus maritimus and littoralis).

In lower areas locally called “lucios“, where the water takes longer to dry in summer, the salt concentrate, making it difficult to grow to most species and favoring other species such as the sharp-pointed rush (Juncus subulatus). The name given to these places comes from the Spanish verb “lucir” (to shine) and the fact that when these places dry out in summer a crust of salt is created over the cracked clay that reflects the light and makes the area shine in the distance.

The “caños” are the branches of the river where the water moved across in the old Guadalquivir River Delta. They still retain their partial functionality and still distribute the rainwater through the marshes to flood it in winter, as is the case of the Caño Guadiamar. The low salt content, washed by the running water for centuries and its deeper waters offers favorable conditions for other types of plant communities. Nowadays, there are large patches of broadleaf cattail (Typha latifolia) and phragmites reed (Phragmites australis), where moorhens and purple swamphens, glossy ibis, purple herons and marsh harriers hide and breed among many other species.

Bordering the great Guadalquivir River, we find a strip of tidal marsh occupied by plants adapted to live in very saline environments. This area is dominated by an invasive plant original from Southamerican, the denseflower cordgrass (Spartina densiflora), which competes successfully with our native plants and affects sedimentation dynamics in the marsh, due to its high stem density and high propagation rate.

The highest areas, only a few centimeters higher than the rest, make up the dry marshes, which remain most of the year free of water, appearing as a great salt steppe where the chenopodiaceae as the glaucous glasswort (Arthrocnemum macrostachyum) and the alkali seepweed (Suaeda vera) dominates. A great variety of steppe birds like crested lark, calandra lark, pintail sandgrouse and stone curlew feed and reproduce here.

There are some areas still slightly higher locally called “vetas“, often formed by accumulations of alluvial sand, which are rarely flooded. These are ideal places for the breeding of species such as flamingo and whiskered terns and waders such as avocet, black-winged stilt, collared pratincole, lapwing and kentish plover. The old cattle keepers of the marsh used to build their huts here, to keep themselves and their cattle safe from the great floods.

All along the contact area of the marsh clays with the sands of dunes and cotos we find a narrow strip of land of great importance, whose width can reach many hundreds of meters. It is what we call the “vera“, area of grasslands and reedbeds. Here the water accumulated in the underground beneath the dunes slowly emerges on the clays of the marshes, even during the summer, attracting a multitude of animals that can not find any other source of water during the dry season. It is also here where we find the famous Pajareras of Doñana, old cork oaks on which each spring herons and spoonbills build their breeding colony.

At some places we find, being visible only in summer near the marsh edges, with light depressions in the plain where the filtered waters from the sands emerge, these are the so called “ojos” (eyes) of the marshes.

Chapter on its own deserves this plant formation unique in Doñana that develops along the edges of La Rocina Stream, which flows into the marshes very near El Rocío. Here dense formations dominated by willows (Salix sp.) and alder buckthorns (Frangula alnus) form entangled jungles covered with great fen-sedge (Cladium mariscus) and ferns and guarded by bands of blackberry bushes (Rubus ulmifolius), wild vines and honeysuckle (Lonycera sp.). In the rich soils of the high areas of the margins several century-old cork oaks grow along with umbrella pines, strawberry trees and white poplars. This is the coolest place to go for a walk in summer.

We offer you the exciting and true experience of the ecosystems and species of Doñana, a nature paradise in Europe.